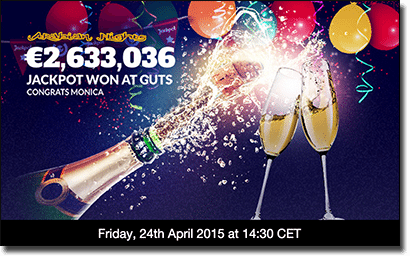 A player at Guts Casino has won the €2.6 million jackpot on one of our favourite progressives, Arabian nights, bringing the number of wins on Net Entertainment progressives in the past week to a total of three.

We’re guessing this is some kind of record and we are excited that one of our favourite online casinos was a part of the achievement, with the Internet gaming establishment even breaking their own record.

Guts online casino offers an array of jackpots, with frequent wins on their games. However, this progressive win has meant that the Internet casino has now broken its own record with it being the highest win ever at Guts online casino.

The jackpot went off after woman named Monica jumped online during the early hours of Thursday morning. Monica, a Swedish player, hit the jackpot at 3:47 am (around 11:47am AEST on Thursday, April 23) and funnily enough, Monica didn’t even know she had won. 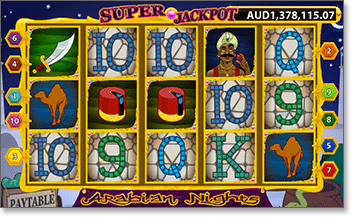 After she landed the five wild symbols, triggering the jackpot of exactly €2,633,052 ($3,653,215 in Australian dollars), she continued to spin a few more times as she didn’t think she had actually won the progressive total. Perhaps she was sleepwalking because she then went to bed, unknowingly a millionaire.

It wasn’t until the team at Guts rang Monica to congratulate her that she knew she had actually won the jackpot.

While Monica came to terms with the idea of winning the jackpot, the Managing Director of Guts, Robin Reed, congratulated her.

“We love to celebrate winners at Guts and this is the largest win we have ever had the pleasure of celebrating,” he said.

“We are so happy for Monica who has been playing at Guts since the start and we look forward to making more millionaires in the future.”

Once Monica had overcome the initial shock of winning, she told the team at Guts exactly what her plans for the money were.

“I will pay off my home loan, help out my children and my grandchildren, donate some money to charity and then enjoy a little travelling with my family,” she said.

There are over 29 jackpot progressives available at Guts online casino and with so many progressives going off in the past week it might be a good idea to head on over and have a spin.

In the past week, three NetEnt jackpots have been won which included the aforementioned Arabian Nights win at Guts online casino. This has seen around €11.8 million in total won across the three NetEnt progressives in just seven days.

On Friday, April 17, the NetEnt jackpot, Mega Fortune, reached €1.5 million ($2,083,102.63 in Australian dollars) and was won by yet another Swedish player at SverigeKronan, a Swedish online casino. The 34-year-old played on his smartphone and with just one spin he became a millionaire.

That following day on Saturday April 18, €7.8 million ($10,831,745.42 in Australian dollars), the biggest win out of the three, was won by a Norwegian player at the Betsson online casino on the Hall of Gods progressive by Net Ent.

Sign up for an account and win big money at Guts Casino and try your own luck on their diverse range of progressive jackpot pokies.
Tags: GutsNetEntPokiesProgressiveSE
Show More