September has been a busy month for Microgaming, with the release of two new pokies games at Microgaming powered casinos – Lucky Zodiac and Rugby Star. You can now play both new releases at our recommended secure casinos like Bovada Casino for real money or free play.

The two game themes couldn’t be more different, one featuring the exotic astrological symbolism of the Chinese zodiac while the other gets gruff and manly with some high powered sports action, but both games share a simplicity and classic pokies format that’s sure to attract many players. 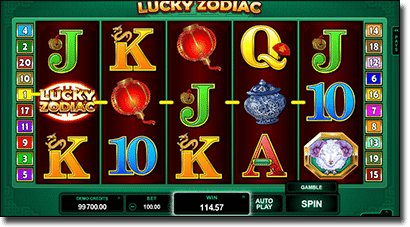 Whether you know anything at all about Chinese Sheng Xiao astrology, Microgaming’s Lucky Zodiac is a well designed pokies game that’ll leave you in wonder of the ancient beliefs of the Orient.

One of the coolest things about Lucky Zodiac is that the animal symbol within the game is set to change within the turn of the Chinese New Year, so while the current zodiac symbol is the sheep, 2016 will see it transform to suit the Year of the Monkey. With up to 140,000 coins up for grabs, Lucky Zodiac is worth a spin whether you’re interested in astrology or not.

Check out this video for a preview of what to expect from Microgaming’s Lucky Zodiac and head to Bovada Casino to give it a go for free or real money wagers.

To celebrate the 2015 Rugby World Cup, Microgaming has come up with a rugby themed pokies that will keep the rugby fanatics well taken care of between watching all the biggest matches. 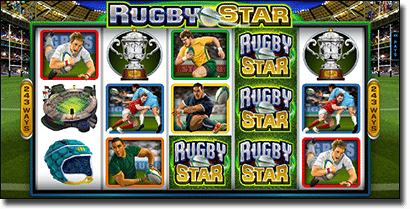 Rugby Star is a five reel, 243 way pokies with all kinds of exciting features including Rolling Reels, stacked wilds, multipliers and a scatter symbol that can award up to 25 free spins. Symbols are made up of all things rugby – helmets, trophies, spiked shoes, stadiums and a bunch of rugby players in mid-game action.

One of the standout features of Rugby Star is that reels three, four and five have the power to turn random at any time (which they did quite often during our testing) which opens the possibilities for some big wins.

With a minimum bet of 0.50, a maximum bet of $50.00 and a jackpot of $120,000, sports fans will love Rugby Star. This game follows suit in the collection of other Microgaming sports based slot releases, Cricket Star and Football Star. Rugby Star is available for both desktop and mobile play.

The Rugby World Cup commenced in England on the 18th of September and will end on November 1st, so join in the competitive spirit and try Rugby Star at one of our recommended Microgaming casinos today – Bovada Casino is our top pick for players signing up from United States.