Developed by Microgaming and debuting at our recommended AUD casino sites today, every $50 bet wagered in Hot as Hades will grant players one entry into the lucky prize draw to score some awesome tech gadgets, along with any potential cash winnings from the reels.

The prizes up-for-grabs include: 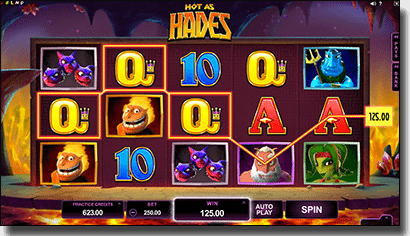 The five winners will be chosen by Microgaming and announced on August 3, 2015.

Hot as Hades is a 5 reel, 20 payline online pokie with a light-hearted, tongue-in-cheek approach to popular Greek mythology and the ancient Greek god of the Underworld.

Hades, who takes on a more goofy, friendly look, is animated with 3D computer graphics and cinematic audio and visuals, showcasing continuous technical advancement from Microgaming in the online pokies department.

The slot includes multiple gameplay features to maximise player’s potential earnings, such as the Quest for the Crystal Helm, a bonus 5-level game triggered by scoring three or more scatter symbols. Players can win up to 100,000 coins by uncovering the Crystal Helm.